Improving lives for families affected by HIV and AIDS

The physical and psychological health of children in Sub-Saharan Africa is affected by the prevalence of HIV and AIDS in their communities – but University of Oxford research is changing that.

Professor Cluver’s research at the University of Oxford represents a decade of research into the broader issues of HIV and AIDS.

These issues range from how to ensure that adolescents adhere to their medication to ensuring that their psychological wellbeing is protected. As well as meeting SDG 3 for Sustainable Health and Wellbeing, the approach of the numerous programmes is to unlock broader intersecting issues that reduce the effectiveness of HIV/AIDS treatment and prevention for children and adolescents. 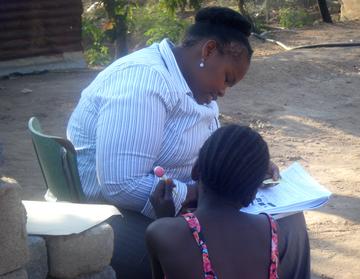 Through collaboration with the South African government and major NGOs, the findings of the first of the studies – the Orphan Resilience Study – were incorporated into the policies of the likes of UNICEF, Save the Children, and PEPFAR-USAID. The study revealed AIDS-orphaned children suffer more extreme psychological disorders than children orphaned by other causes. Each of Professor Cluver’s follow-up, evidence-based projects have sought to demonstrate – and ultimately help solve – the other devastating ways in which HIV and AIDS affect communities and their young.

The first follow-up study is Young Carers, currently the world’s largest study of AIDS-affected children. Having followed 6,000 children and 2,500 of their adult caregivers over a three-year period, the study showed that parental AIDS has severe educational, sexual and psychological effects on children. Based on the findings, including the HIV-prevention impact of social welfare grants, the Global Fund for AIDS, TB and Malaria is rolling out a ‘cash plus care’ programme to 30,000 girls in South Africa, and UNICEF to 200,000 children in four African countries. This evidence has had a major and direct impact in Kenya, Lesotho, Malawi, Mozambique, South Africa, Swaziland, Tanzania, Uganda, Zambia and Zimbabwe as the ‘cash plus care’ programme was included in the DREAMS evidence-based interventions across these countries.

Child abuse is common in Sub-Saharan Africa, exacerbated by the burden of HIV and AIDS. With the aim of reducing violence, the Sinovuyo Teen Study, launched in 2013 and funded by the ERC, involves the development and evaluation of a free parenting and teen programme. In collaboration with the World Health Organisation, UNICEF and Professor Catherine Ward from the University of Cape Town, Professor Cluver is working with a large cohort of vulnerable families in the Eastern Cape. Based on strong initial results, the programme is already being adopted in 8 countries with 152,000 families.

In the Mzantsi Wakho ‘Our South’ project, Professor Cluver is working with Dr Rebecca Hodes and Dr Elona Toska at the University of Cape Town to investigate the low rate among HIV+ adolescents of adherence to anti-retroviral treatment (ART) and access to sexual and reproductive health (SRH) services. The study, which is the world’s largest survey of HIV+ adolescents, also uses workshops to assess service delivery models for ART and SRH services. Based on findings so far, the team have worked directly with UNAIDS and UNFPA, and have authored South Africa’s ‘National Adolescent & Youth Health Policy 2017’.

Professor Cluver works with a dedicated team of post-doctoral and doctoral students, who are now launching and leading their own projects to help vulnerable children in the region. With around 100 million children affected by HIV, of which 80 million are in southern and eastern Africa, Oxford University’s research is set to inform lasting, meaningful change.

This first appeared as an Oxford Impact case study.

Co-creation: including teenage experts in research

As part of co-creation of research, Professor Cluver and her research team have maintained a 'Teen Advisory Group' in South Africa. The TAG are a group of HIV-affected adolescents who are able to inform the research and directly engage with policymakers. The TAG meet at annual weekends, and have ongoing involvement with the group. One example of their input is the co-creation of three large-scale longitudinal surveys.